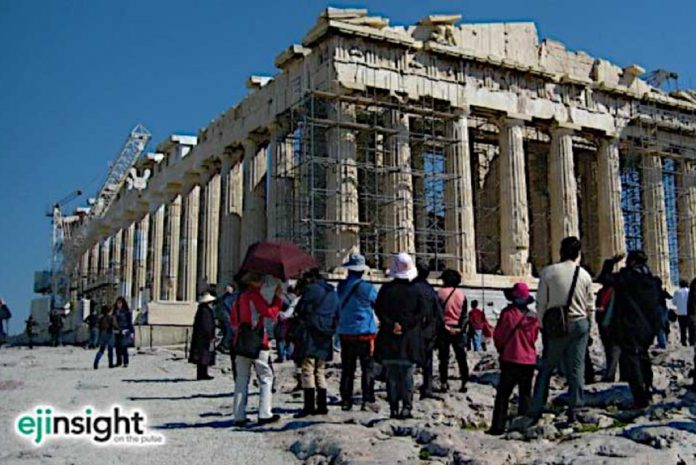 At the recently concluded annual China Outbound Travel and Tourism Market (COTTM) event in Beijing held during April 2018, it was evident that China is THE largest source market for inbound tourists. China National Tourism Administration revealed that Chinese tourists last year made over 130 million trips overseas and spent US$115.29 billion during their travels. Their spending numbers are expected to exceed US$163 billion by 2024. China’s government statistics account for about 120 million Chinese currently registered with passports.

This is just 9 percent of the country’s total population as compared to the 36 percent of USA’s population that are registered with passports. With this comparison, it is certain that the Chinese outbound tourism market will continue to flourish with highly sustainable growth numbers in the years to come.

Chinese tourists are coming to Greece in big numbers. Last year, over 170,000 visited the country in group tours or as individuals. Their arrivals are expected to rise even more rapidly. Surveys on the more significant push–pull factors for visiting Greece are; its history and archeological sites, cultural knowledge, relaxation, escape from the routine, prestige, the blue and white colors of Cyclades, quality service of hotels and last but not least, Greek food and the good organization of events. It was observed in a hotel in Athens that Chinese visitors represent a quarter of their guests. But despite minor issues that concern meals (they prefer food from their own country), their numbers are definitely on the rise. In recent times, hoteliers have been trying to adapt, some are already offering Chinese food, while more and more Chinese restaurants are opening up in Athens as well as in other key cities of Greece.

To tap into China’s enormous travel market, Greek authorities are making visa processing much easier for Chinese nationals as well as increasing on the connectivity between China and Greece. For example, Air China which used to fly to Athens via Munich has launched direct services since 30 September 2017. There are also plenty of scheduled flights from 30 cities in China and flying to Thessaloniki, Heraklion, Crete, Mykonos, Santorini, etc. Chinese holidaymakers planning their travel getaway to Greece have been using Fliggy (formerly known as Alitrip, the online travel platform of China’s Alibaba ecosystem). Fliggy is an OTP (OpenTripPlanner) that offers direct connections between the airline and their customers. It has over 200 million registered users.

At another recently concluded event, the Customized Travel Summit, held in Budapest, Hungary during April 2018, which is the first Business Summit of Ctrip. At the Summit, a report on the customized travel patterns of Chinese visitors to Europe was jointly released by Ctrip and the China Outbound Tourism Research Institute. It cited that Customized Travel is the new norm of outbound tourism where the Chinese traveller is more willing to spend on unique local experiences and with higher demand and taste for more refined, self-coordinated and individualized tours.

Ctrip’s Customized Travel website has seen increase of over 120,000 users per month. Through its platform, travel and hospitality chains as well as agencies from around the world are coming together to provide unique travel experiences that are customized, personalized, and transparent for the ever-growing Chinese outbound travel market.

The Writing Is Certainly On The wall

During the first two months of 2018, tourist visas for Greece issued in China increased by 53.5%. The Greek National Tourism Organization Office in China, following its participation in the Guangzhou International Travel Fair 2018 with an impressive 99 m2 pavilion, had announced an increase of 30-40% in travel package signings by travel agents and tour operators in China. Chinese influence gathered momentum through a 67% profile with Piraeus, a home port for cruise liners. COSCO, China’s state-owned shipping giant now manages Piraeus Port Authority (PPA). With cruise vacations becoming extremely popular in China, the deal with China Eastern Airlines will provide chartered flights to facilitate the journey from China to Greece. “We want to become a bridge linking Chinese tourists to Greece, to enjoy cruise vacations here”, says Fu Chengqiu the CEO of PPA.

On the 21st April 2017, the first cruise ship, ‘The Celestyal Olympia’ docks at Piraeus. It will sail with 200 Chinese tourists to the Aegean Sea islands, docking at Mykonos, Kusadasi, Samos island, Patmos, Herakleion port city on Crete island and Santorini, before returning to Piraeus port on the following week.

Based on China’s Foreign Minister Wang Yi’s indication, Greece can expect to welcome 1.5 million Chinese travelers within the next five years – a hefty 10-fold increase from last year!

Chinese Content – A Must Have For Hoteliers & Hospitality Establishments

To vie for a slice of this gigantic influx of tourists, hoteliers and hospitality business owners in Greece intending to engage with the Chinese, or with any other multi-ethnic markets for that matter, should bear in mind the age-old adage – ‘Can’t read, won’t buy’ (watch video). It is a natural perception that everybody would want to read and understand product labels or directions, in order to make informed decisions.

As China is known to be Mobile-first, meaning that the Chinese are doing everything on their mobile phones (research, plan, transact, etc.), it is imperative that websites and booking portals are equally optimized and provided with content in their preferred language. In other words, mobile-friendly websites with Chinese content enjoy higher prominence with keyword searches amongst China’s outbound tourists and better chances for a CTA. Because with content in Chinese, would-be travelers have instant access to a hotel’s or hospitality establishment’s branding or marketing content.

These are vital information that they can comfortably read and be able to understand enticing messages on ‘attractive deals’, ‘privileges’, ‘in-bound tours’, ‘where to go’, ‘what to eat’, ‘what’s new’, etc. No longer are most people relying on printed books or brochures as many of which are soon outdated after publication. While the cost to implement websites with multiple languages is mostly a one-time investment, the returns from the wider reach on social media platforms, from winning more customers in multi-ethnic markets and the financial benefits, are indeed manyfold.

Joanne is the Global Business Director of IPPWORLD. She specializes in helping brands go global with transcreation and multilingual project management solutions. Joanne can be reached at: joanne.chan@ippworld.com, or through Linkedin.

How To Make Your Valentine’s Breaks Stand Out In 2023

Opportunities For Tourism Due To Post-pandemic Travel Triggers