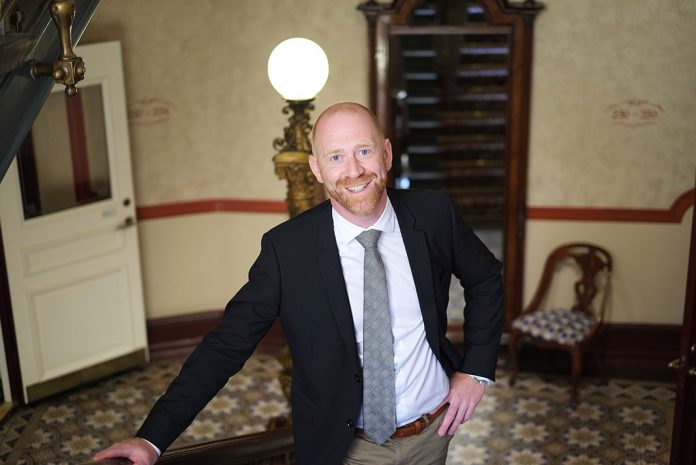 We caught up with Hotel Royal Manager Henrik Lind to discuss his philosophy on hospitality, the hotel’s unique interior, and amenities that revolutionize the guest experience.

It’s no wonder Hotel Royal has become one of Gothenburg’s historical landmarks. It was built already in 1852 which makes it the city’s oldest hotel. The first cornerstone of the building was placed in 1850 and two years later Sundbecks Nya Hotel För Resande, which eventually changed its name to Hotel Royal, was opened.

A lot has changed since Hotel Royal first opened its doors almost 170 years ago: Gothenburg has grown from a backwater town to a trendy Nordic city that attracts millions of tourists from around the world every year. The population has grown from only thirty thousand to a half million inhabitants.

No matter how much the city might change, the hotel building remains the same. That’s important for Hotel Manager Henrik Lind as well: “Thanks to our long history, we see everything in long-term. We for example reinvest a fair share of the profits in maintaining the building.”

The hotel has received numerous facelifts over the years in order to meet the standards of modern travelers. It has been managed by the Oddestad family for 38 years now. They have preserved the atmosphere of the building very carefully and kept stunning interiors dating to the end of the 19th century: there’s for example a hand painted glass ceiling, beautifully patterned stone floors and an Art Nouveau staircase with hand-forged banisters.

Travelers seem to love the building. After taking a look at Hotel Royal’s guest reviews, you quickly notice one word repeating itself: authenticity. There is no hotel like Royal, that’s for sure.

Lind believes in timeless service: “I use to say, what’s the difference in running a hotel in 1850, 1950 or 2050? I think there’s no difference: you welcome guests, give them a key, serve breakfast and then say goodbye again. We don’t want to change existing best practices just because something is the new thing in the market.”

In a world where everything changes quickly and competition between hotels gets tougher and tougher, you would expect it to be necessary for the hotel to constantly change as well. According to Lind, it might actually be the opposite. No hotel should change just for the sake of changing.

Lind decides carefully, which amenities to deploy and which not. “It’s not that we don’t like to try new things, we just don’t do everything that everyone says is the next big thing.”

He gives traditional room keys as an example: changing them to smart keys and smart locks would take away the most important thing, interaction with the guests. “We still want to greet our guests, talk to them and make them want to come back. Not everything has to be about efficiency.”

What’s a good amenity then? Something that revolutionizes the guest experience. Like Valpas for example. Valpas makes design bed legs that keep guests safe from bed bugs. Valpas Hotels is a network that connects the most thoughtful hotels of the world that are all safeguarded from bed bugs.

Lind is one of the lucky ones, who hasn’t encountered bed bugs in his hotel but acknowledges the risk: “We want to do everything we can to make the guest experience to always be excellent. As traveling in Gothenburg increases, we know that there is a huge risk that someday we will encounter bed bugs. We can’t prevent them in any other way”, says Lind.

Hotel Royal has always been an independent and family-owned hotel. During its whole existence, the most important thing for the hotel has been to provide personal service and outstanding guest experience. The hotel staff plays a key role in the success of these two.

Lind wants his employees to enjoy coming to work every day. It seems to be especially important for him that the staff doesn’t need to hurry. He wants to create a feeling to both the guests and to his employees that there’s always time for them.

“We see our customers. We see our staff. It’s all about seeing other human beings. We respect everyone and treat everyone as equal” says Henrik, takes a pause and continues “We take time to get to know our guests.”

The Impact of AI on the Hotel Industry