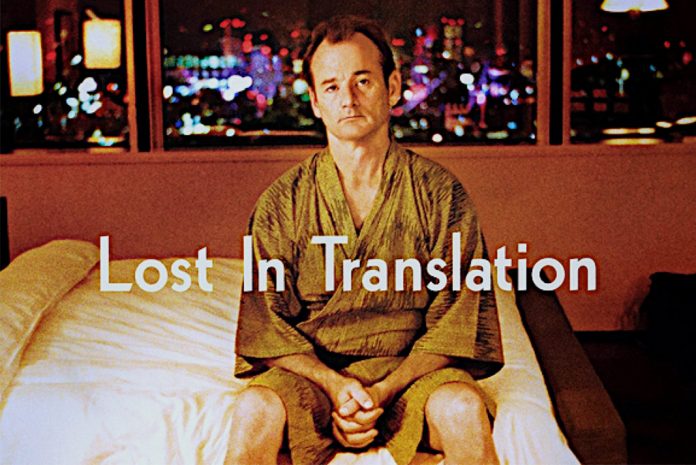 The leading actors Bill Murray and Scarlett Johansson also won awards for their roles. The film, shot in Tokyo, was about two people who were somewhat lost in their own lives.

In a literal sense, we experience people of different language background being lost-in-translation. While on the flip side, we also get to understand that friendship needs no translation.

As far as this movie ‘lost-in-translation’ goes, it was all for its intended fun, to add to the amusement and the comical outcome enjoyed by the audience.

But in a real business world, ‘lost-in-translation’ can have very damaging consequences to one’s reputation, which could even result in an unfavorable bottom line too.

Hotel, Japan:
YOU ARE INVITED TO TAKE ADVANTAGE OF THE CHAMBERMAID.

Moscow hotel located across a Russian Orthodox monastery:
YOU ARE WELCOME TO VISIT THE CEMETERY WHERE FAMOUS RUSSIAN AND SOVIET COMPOSERS, ARTISTS AND WRITERS ARE BURIED DAILY EXCEPT THURSDAY.

Airline ticket office, Copenhagen:
WE TAKE YOUR BAGS AND SEND THEM IN ALL DIRECTIONS.

Most businesses promoting to multi-ethnic customers depend on translation services for creating cross-language marketing content. Understandably, this is the most economical and efficient option, instead of creating publicity literature freshly copywritten in various foreign languages.

In global marketing, content localization (which is a more complex process of translation) is the ideal approach for corporate branding objectives, such as the creation of a standardised content look-and-feel, consistent layout, colour concept and use of images or illustrations for the respective language versions.

In essence, the source text and design concept of the original language content are provided to translators as a form of template. These templates are then overlaid with translated text to create derivative versions in whatever target languages.

Undoubtedly, translation is a service that helps simplify and expedite international business communication. However, when processes are incorrectly or incompletely applied, it can be a very expensive lesson. In extreme cases, the end-result of a marketing or publicity campaign can be downright catastrophic.

There are many causes and reasons that lead to poor or bad translations. This results in a localised language content that reads awkwardly or nonsensically.

Bad translation occurs due to a misunderstanding of the source (original) content or the copywriter’s intended pun.

This is likely to be the cause in localising creative or marketing-related literature where writers are fond of using satire, colloquial slangs and figurative expressions to entice readers’ interest.

Erroneously translated information, due to a wrong interpretation of the original intended message, could even be life-threatening or disastrous, especially when dealing with critical instructions (Read: major fails).

Whichever is the outcome, it is certainly distressing for any business to have wasted time and money. Poor quality translations will definitely impact marketing efforts negatively and tarnish a company’s reputation.

Such failures in global marketing will cause undue embarrassment and lost opportunities.

To understand why translations can go awry, we need to examine certain underlining principles:

Although the ‘Terms of Reference’ of each word or phrase is intentionally assigned by a writer, the sense of perception of its object or concept could vary from reader to reader.

This is due to a person’s vocabulary, intellectual experience, level of exposure on general knowledge, language skills, etc., resulting in different people perceiving the sense of a word or phrase differently.

These are the so-called nuances that are unique to each language. For example, was it something for the ‘sense’ to perceive as serious or funny?

Was it meant as a metaphoric expression, in other words, not to be literally applicable?

Languages are living phenomenon and cannot be regarded as black and white. Like most living things, there’s going to be change, variation and influence in languages by their many compounding aspects such as, lexicon, vernacular, colloquial jargon, etc. (Read: Language is Alive!)

The ‘Writer’s Meaning’ of particular words or phrases is the intended meaning that the content was referring to.

While ‘Audience Meaning’ is what the audience understands when reading those same words or phrases. Since the whole point in language is about communication, the primary aim is for ‘Writer’s Meaning’ and ‘Audience Meaning’ to correspondingly tally up.

When a source copy ‘Writer’s Meaning’ and the translated ‘Audience Meaning’ fail to connect (do not match up), it is a case of ‘lost-in-translation’.

In other words, through the conversion into another language, it either became an unintelligible message, or a different message altogether. Resulting in a loss of understanding, while for marketing initiatives, a potential loss in revenue too.

After all, when your customer does not understand what you’re selling, they are less likely to buy.

Being Bilingual Doesn’t Qualify as a Translator

In language communication, a bilingual person isn’t necessarily a translator.

Often times, a bilingual colleague may be called upon to perform translation. While it may seem that some cost has been saved, the outcome is questionable if that colleague is not sufficiently knowledgeable of the topic, or not qualified enough to perform a proper publishing standard and well-understood translation.

It’s quite obvious when we consider that professional translators must first undergo tertiary studies on linguistic, cultural and social conventions. They must also be tested and certified, as well as having attained several years of in-depth and professional involvement in a related industry.

For example, having the ability to appreciate good tasting food doesn’t qualify one as a good cook. While an eloquent speaker is not necessarily an eloquent writer, and vice versa.

Although AI technology has improved in its deliverance for translated cross-language messages, it is far from the requirements and expectations when we are dealing with a business world.

AI systems literally focus on words as a form of ‘dictionary’ meaning, instead of its context (the intended meaning when combined with other words).

Although software can be programmed to recognize the context of words and create a translated version in another language, it’s simply impossible to create a complete database of translations since there are infinite word combinations.

In fact, machine translation systems were created to aid professional translators, and not to replace or make them redundant.

Due to oversight occurring in the source file, the wrong, improper or incomplete source content may have been provided for the translation workflow.

Usually, these are instances where the source files sent to the translator were not the latest or did not tally with the final copy used for creating the website or printed materials.

Other potential pitfalls could be due to missing words or sentences, use of colloquial slangs, jargons or coined word that are not internationally understood, use of abbreviations, text with software codes, extensive grammatical errors, SMS-type text, incorrect references, etc.

Therefore, it is essentially critical that all source copy must have been thoroughly proof-checked, approved and ready, prior to releasing them for translation.

Here are real-life translations from around the world with their respective target language versions provided as back-translations in English:

In a Bangkok temple:
IT IS FORBIDDEN TO ENTER A WOMAN, EVEN A FOREIGNER IF DRESSED AS A MAN.

Advertisement for donkey rides, Thailand:
WOULD YOU LIKE TO RIDE ON YOUR OWN ASS?

Cocktail lounge, Norway:
LADIES ARE REQUESTED NOT TO HAVE CHILDREN IN THE BAR.

Doctor’s office, Rome:
SPECIALIST IN WOMEN AND OTHER DISEASES.

In a Nairobi restaurant:
CUSTOMERS WHO FIND OUR WAITRESSES RUDE OUGHT TO SEE THE MANAGER.

On the main road to Mombassa, leaving Nairobi:
TAKE NOTICE: WHEN THIS SIGN IS UNDER WATER, THIS ROAD IS IMPASSABLE.

In a cemetery:
PERSONS ARE PROHIBITED FROM PICKING FLOWERS FROM ANY BUT THEIR OWN GRAVES.

Tokyo hotel’s rules and regulations:
GUESTS ARE REQUESTED NOT TO SMOKE OR DO OTHER DISGUSTING BEHAVIOURS IN BED.

In a Tokyo bar:
SPECIAL COCKTAILS FOR THE LADIES WITH NUTS.

On the menu of a Swiss restaurant:
OUR WINES LEAVE YOU NOTHING TO HOPE FOR.

Hotel, Yugoslavia:
THE FLATTENING OF UNDERWEAR WITH PLEASURE IS THE JOB OF THE CHAMBERMAID.

Hotel, Zurich:
BECAUSE OF THE IMPROPRIETY OF ENTERTAINING GUESTS OF THE OPPOSITE SEX IN THE BEDROOM, IT IS SUGGESTED THAT THE LOBBY BE USED FOR THIS PURPOSE.

A laundry in Rome:
LADIES, LEAVE YOUR CLOTHES HERE AND SPEND THE AFTERNOON HAVING A GOOD TIME.

The above are just a fraction of laughable bloopers – certainly weren’t funny to the brands or businesses they were associated with.

Which is your favourite one?

As a Language Service Provider, IPPWORLD (http://www.ippworld.com) assists travel, hospitality and lifestyle establishments enhance their engagement strategy in global markets. We provide end-to-end Multilingual Localization and Transcreation (creative translation) solutions for website content and online booking information. Transcreation encourages higher readership amongst native-language speaking communities, helps drive conversions, grows revenue and builds brand loyalty. To understand how you can connect with your global audience through transcreation, drop us a mail at info.singapore@ippworld.com, or connect with Joanne Chan on Linkedin.

The 5 Best Tools to Keep Your Guests Well-Informed & Entertained