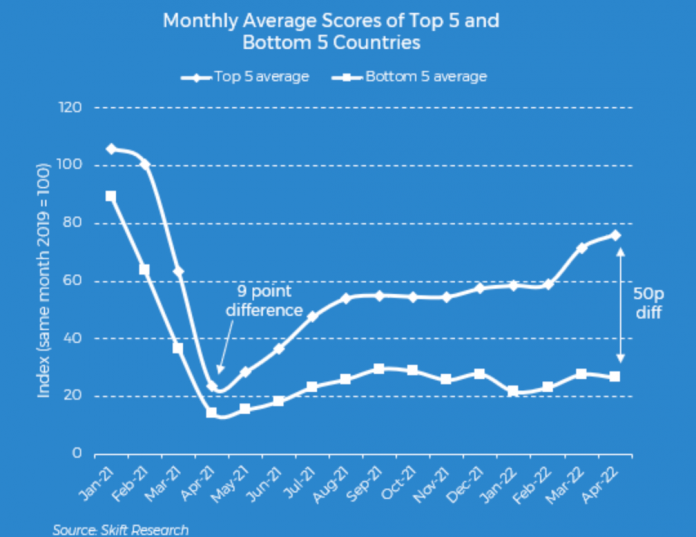 The latest edition of the Skift Recovery Index proved April to be another fairly strong month overall, with the average global score now standing at 58 points in April 2021. However, although the travel industry’s recovery is seemingly continuing, it’s not quite as impressive as it was in March. Compared to a baseline of 100 in April 2019, there clearly remains a significant inconsistency in the recovery between the 22 countries tracked in the report.

The divergence between the performances of strong and weak countries is growing, with some strong performers, including Brazil, the U.S., and Mexico, masking weakness shown by Europe and the majority of Asia. However, although Europe’s performance, in general, remains low, various key announcements in recent months give us cause for curiosity about performance for May.

In Mexico, although vaccination rates are relatively low compared to other nations, infection rates are also low. Its open border policy has enabled it to break through the 90 point barrier in the recovery index this month, taking travel performance levels back to an impressive 92% of pre-pandemic levels.

The travel industry in the U.S. also has cause for positivity with its recovery now sitting at 80% of pre-pandemic levels. Although this is good news, the stellar performance we saw in March has started to drop already and it will be hard for the U.S. to rise up those last 20 percentage points. This is due to the country still dealing with relatively high new case levels, vaccine slowdowns, and an ongoing lack of international travel.

Over in Europe, it’s a bit of a mixed bag. Overall, it’s clearly the worst performer out of all the regions globally, but the gravity of the situation does differ slightly from country to country. In March, the UK was the best performer, but despite slowly easing out of lockdown and appetite to travel inevitably rising, the UK’s national borders remained closed and so April’s performance wasn’t quite as good.

Tourist hotspots such as France and Germany saw their scores drop in April, while Turkey’s performance reflects the fact that they’ve been grappling with soaring COVID infection rates and a vaccine shortage at a time when they would normally be experiencing a surge in bookings for the summer season.

The Skift Recovery Index is a real-time measure of where the travel industry stands in recovering from the COVID-19 pandemic. The Index is compiled from data provided by industry leaders, including Amadeus, Duetto, OAG, and Skyscanner, amongst others. Subscribe here: research.skift.com/recovery.

Bulgarian Hotels in COVID-19 Mode: How Precautions Are Implemented